As a photojournalist and author, Linda Solomon reveals the heart of her subjects.  She has divided her career between capturing the most famous personalities of our time and teaching children and youth to express themselves through photography.  She is the founder of PICTURES OF HOPE, helping homeless children share their heartfelt dreams through photography.  Linda is a member of the Michigan Journalism Hall of Fame.  In 2020 and 2021, Linda has been writing Sunday feature stories for the Detroit Free Press.

Linda Solomon was selected by the photography industry’s Imaging Alliance for the national award “Photographers who GIVE BACK.”  In 2018, Linda was chosen by the family of international icon Aretha Franklin to be the family photographer at Aretha’s memorial.  Linda’s most recent book THE QUEEN NEXT DOOR ARETHA FRANKLIN AN INTIMATE PROTRAIT documents four decades of a special relationship with Aretha.  THE QUEEN NEXT DOOR was selected as one of Michigan’s Most Notable Books in 2020 and has received a prestigious nomination from the international Indie Book Awards.

Linda Solomon and Pictures of Hope were chosen for the prestigious NBC Nightly News MAKING A DIFFERENCE.  Other honors and national awards include a Distinguished Woman Award from Northwood University.  Linda Solomon was chosen Volunteer of the Year in Tucson, Arizona.

Linda Solomon is a noted author and renowned public speaker.  Her TED X TALK has received national acclaim.  She has had one-woman shows of her celebrity portraits in galleries and exhibitions throughout the United States. She has the distinction of having the first one-woman photography exhibition show in the history of The New York Friars Club.  Linda Solomon has been a featured instructor at both Canyon Ranch and Miraval in Tucson, Arizona.  She has been commissioned by numerous celebrities and noted authors including Tony Bennett, Robert Redford, Morgan Freeman, author Elmore Leonard, as well as Robert James Waller, author of The Bridges of Madison County.  Her work has been collected by noted artists and designers including Tony Bennett. “Linda Solomon is a great artist and I have enormous respect for her work.” Tony Bennett

One of Ms. Solomon’s books, “The Key, The Celebrated Unlock Their Secrets of Life”, offers rare and exclusive insights from the most famous people of our time, including Barbara Walters and Sidney Poitier.  Now, more than ever, there rare interviews will help others because of the words of inspiration in this book.  Proceeds from “The Key” benefit breast cancer research, and there are key words of wisdom from noted breast cancer survivors, including Olivia Newton-John, Melissa Etheridge and Olympian Peggy Fleming.

“I am so very grateful to have the opportunity to meet the most famous people and document their lives with my camera.”  My dreams continue to come true in my career as a photojournalist.  I share my dream by helping children express their innermost feelings in their heartfelt “Pictures of Hope”.  The power of one image has changed a life forever.”

Pictures of Hope is a registered 501(c)(3) charitable organization where 100% of the proceeds go toward helping the children with whom we interact through the organizations who serve them. We offer turnkey corporate sponsorship programs so that you can empower your whole organization to make major community impact you can verify. 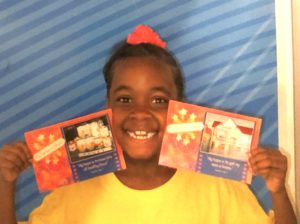